The usual issues of Time and Space have meant that the battle at Rahden remains in hiatus - impatient grumblings may be heard from the troops confined to their storage box.  I hope to return to that very soon, but in the meantime a small diversionary effort  may be in order - let's look at some scenery. There were a couple of approving comments on the buildings of 'Rahden' that featured in the game, so I thought I'd show you them here.

Keen-eyed readers will have noticed that none of  the previous 'Portable Seven Years War' battles have involved villages or towns - because I had no buildings in the right scale. Or so I thought:  but casting around for scenery for the town in my recent game, I remembered a few likely models acquired from The Works - I think they were sold as Xmas table decorations, at about £3 each.

They needed some colouring, though. Being anything but a skilled painter, and also being in a hurry, I went for an extremely simple scheme - starting with thinned PVA as a sealer, then just a red/brown or grey roof, and white or buff walls, and a grey-brown base. 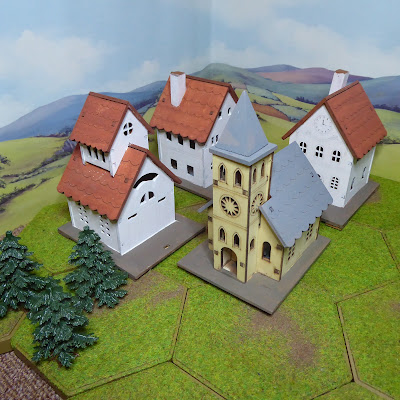 Keeping the paint quite thin allowed the etched details of roof tiles, doors and the the clock on one of the houses  to show through, and the  simple overall effect seems in keeping with the generally nostalgic feel of my Seven Years War setup.  They bring to mind Charles Grant's home-made Germanic-looking buildings, as featured in his 'The War Game' and 'Battle - Practical Wargaming',  images imprinted on my mind since childhood. I couldn't really do anything else, could I?

As you've seen, they were ready in time to play the role of 'Rahden' in the recent game, and looked fine, to my eyes.  I think they may see plenty more action.

Finally, I should also show their special extra feature - not sure if it will ever be used in a game: 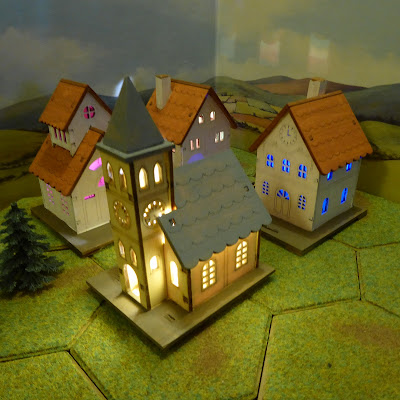 I don't know if they are still available from The Works, but I think I've seen similar things in other gift/general merchandise type shops ( a shout-out to Roys of Wroxham, for East Anglian readers!), and it's the right season.. I'll take a look in my local branch once they re-open, as I think we are promised for non-essential shops in England next week. A couple more houses could be useful.

Next time, back to the battle.  Meanwhile keep safe and well, everyone.