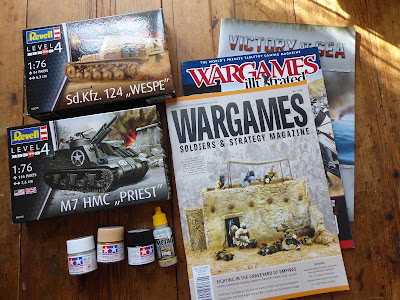 Having some time off work last week, I was able to pay a visit to nearby-ish Bury St. Edmunds. It's a pleasant place to wander and shop, with a  'Cathedral City' feel, a nice mix of old and new, chain and independent shops, and very pedestrian-friendly.  We had not been there, however, since before 'lockdown' in March. So, it seemed about time to return, and I had an ulterior motive - there is a decent model shop, and I needed some paints!  Model Junction,  in Whiting Street turned out to be up and running, with no shortage of stock and sensible safety measures - a maximum 4 customers at  a time was not a problem on a quietish weekday afternoon.  Plenty of paints from several different ranges, but my needs were simple and I was happy to plump for flesh, white and black Tamiya acrylics, and some Brass from the 'mig' range. And of course, one has to take a look at the plastic kits.. these resulted in a a couple of nicely matched  impulse buys, the Revell 1:76  'Wespe' and 'Priest' self-propelled guns. Those will fit very nicely into my 'D-Day Dodgers' forces, and I was quite glad to spend a bit more and support a good local shop. I know on-line shopping is the modern thing, but it's great to have a 'real' shop to browse and make serendipitous finds, and in a pleasant location.

After that, I wandered into WH Smith and looked at the magazine racks - glad to see they are getting back to normal, and I was pleased to see some wargaming magazines. So how could I not support them too?  I came away with 'Wargames, Soldiers and Strategy' no 109,  and 'Wargames Illustrated' issue 392 ( August 2020 ). WSS has experimented with its issue 'theme' ; instead of a single period, it has a run of articles about a single location - specifically Afghanistan. I think this works quite well, with half a dozen pieces  ranging in time from Alexander the Great to 1980s Soviets. Plus the usual run of other articles, including one from Henry Hyde giving a mini-campagin scenario based around a crossroads and river crossing - as you'd expect from Henry and WSS , rather nice maps that are bound to come in handy sometime.  'Wargames Illustrated' is also themed - this time about 'Strategy, Command and Control', which I hope will be interesting.  Rick Priestly  contributes an article on the theme, thus managing to have a piece in both  magazines - his column in 'WSS' is in praise of The Society of Ancients.  'WI 392' also comes with a significant free extra - the rules manual for Warlord Games' new WW2 naval game 'Victory at Sea' . An interesting move, giving the rules away for free - "check out Warlord Games for all the  playing pieces" says the editorial. No doubt they are reassuringly expensive; but for the price of the magazine, you have set of rules as well as the usual articles to read, and no doubt this will interest plenty of naval warfare enthusiasts. Mr Crook, perhaps?

I confess I don't buy these magazines on a regular basis, but I will pick them up if the theme looks interesting, and right now it seemed almost a duty to give them a bit of help - the covid-19 crisis has I suspect,  hit them hard, by taking away their high street sales for some months. Equally I find I have just not been spending 'disposable income' in the past few months, while being fortunate to carry on working, and earning as normal. So I had no problem with a bit of  extra hobby spending.   I had a pleasant afternoon ( albeit dodging thundery showers ) and I hope my shopping was a 'win-win' thing for all concerned!

Next time, back to the Seven Years War and the outcome of the Bridgehead battle. Keep well, everyone.

** UPDATE ** Since the above, issue 393 of Wargames Illustrated has come out, including a special 'freebie' of a set of rules for Wars of the Roses period, entitled Never Mind The Billhooks ( splendid stuff!) written by Andy Callan, no less.  Well worth a look, and a very good initiative from the WI team - good for them!  Much more about that on Norm's most excellent  'Battlefields and Warriors' blog, many thanks to him for highlighting this.

Battle for the Bridgehead

Having gained some new recruits to my forces, I thought it was time to revisit The Portable Seven Years War. What has been happening in our somewhat obsure corner of central Europe? The Prussians, perhaps smarting from the repulse of their earlier incursion, have re-grouped and are essaying  another raid into Austrian terrritory.

Once again I turned to Neil Thomas'  One Hour Wargames  excellent scenario suggestions, and soon found an interesting example with an element of the cross-border raid. Specifically, scenario number 5 : 'Bridghead'. As Neil Thomas describes it,

'The Blue  army has discovered a river crossing in Red territory, and is aiming to secure it. The Red general is frantically trying to mobilise every available unit, in order to stop the enemy bridgehead from being formed'.

'Blue' will be the Prussian raiders, and 'Red' the Austrian defenders. Conveniently I am able to use a 9 by 9 hex layout, which is the same size as Mr. Thomas' suggested 3 feet square table; see the picture above, looking South to North. ( Sadly the giant cat, deployed by  'Red' as shown in Ross Mac's recent Battle Gameof the Month post for the same scenario, was not available to me ).

The scenario specifies that each side has 6 units, and the Prussians will have just one unit deployed at the start, just North of the bridge. They then add  one unit per turn from Turn 2 to Turn 6, entering on the road at the Southern edge.  The Austrians start with no units in position, but deploy two units on each of turns 1, 3 and 5,  each group's entry point decided by dicing - either at the Western edge by the wood, by  the road from  the North, or at the Eastern edge by the hill. Given this  sequence of events, the defenders will actually outnumber the raiders on Turn 1, Turn 3 and Turn 5, and may be able to isolate and  overwhelm the the invader's  vanguard early on - so it should be interesting stuff.

And so to the available forces: using the random selection method from Neil Thomas' book, I rolled the dice and came up with the following nicely varied brigades  ( with Strength Points  for Bob Cordery's Portable Napoleonic Wargame ) :

And of course their commander, Eric von Jemanden, his hasty promotion confirmed after the               narrow victory at Heiligtumshugel .

The two units of cavalry should give them some advantage in striking fast to gain the bridgehead. All units are rated Average except the Elite Rifles; with von Jemanden's 6SP, the force total is 27 SP, and thus their Exhaustion Point is reached at the loss of  9 SP.

And here they are, on the march for the bridge :

Their commander, the brave General Dachs, successful in repelling invaders in the previous                    campaign.

No cavalry, but lots of infantry firepower and some artillery support should be good in defence. All units are rated Average except the Elite Rifles; with Dachs'  6SP, the force total is also 27 SP, and  Exhaustion Point is reached at the loss of  9 SP.

I decided that the Prussians would be able to specify the order in which their units arrived, since they were the attackers and will have planned the operation and their order of march;  while the Austrians would randomly select the units in each  arriving group, as well as the entry point, thus reflecting their hurried scraping-together of a defending force.   Neil Thomas specifies a maximun of 15 turns, with victory to the side holding the bridgehead,  with no enemy units on the North bank of the river within 3 hexes of the bridge.

And so, let the battle commence. Von Jemanden decided that his advance guard would be the von Kleist Uhlans;  Dachs' die rolling  selected the first battalion Botta regiment and the Rifles, entering by road from the North on turn one.   Sensibly the Bottas deployed into line to receive any possible Uhlan charge, while the rifles took to the hill in dispersed formation:

And there we have it. Next time, we shall see how things turn out.  Keep well, everyone.

Well, I'm not the fastest painter in the world, to say the least, but we have some progress. Here are two Fusilier 'units' of the Austrian  regiment (no.12)  Botta d'Adorno, from the unpainted figures acquired from the collection of the late Eric Knowles, and done as per his painting notes. Not the finest painting either, I fully admit, but the best I could do - and  I am quite happy with them for a first attempt (in possibly 40 years!). I have kept the syle back in the1970s too, no shading/washes - that might come later, if I gain confidence.  For the moment I rather like the cleanness of the white uniforms - clearly  fresh out of the barracks, day one of the campaigning season.  I prefer simple basing too, and the green base colour is from a local DIY store's mixing service ( Valspar ) and glories in the name of  'Ribbet'!  A flag will be added to that empty pole, just as soon as I can work out why my printer isn't working - I think 'Warflags' have something appropriate.

Based for use initially with Bob Cordery's 'Portable Napoleonic Wargame' , they will make two battalions for the Brigade Level game ( or perhaps one battalion in various other rules that might be tried ). Base sizes worked out on the highly scientific criteria of  'must get three bases in line,  inside a 100mm Hexon hex'.  Another two units should join them fairly soon, too.
Meanwhile, I have also received some additions to the artillery park - more of Eric's stuff, via David Crook.  A pair of Prussian battalion guns and a brace of nice stubby little howitzers, with crews and limbers, and a bonus of a couple of ammunition wagons at the back. Painted, I assume, by Eric, they will do nicely. Good to have a bit of variety in the artillery train, and the wagons are giving me ideas, how about some sort of convoy/ambush  scenario?   I hope messrs Charles Grant, Stuart Asquith and/or Neil Thomas can provide some inspiration. Anyway here they are, on the Ercol parade ground..
I am hoping I may have some time to set up a small game next week, it's been a while.  There has been some  recent gaming, and jolly good  it was  too, but that has been described by the most excellent MS Foy on his blog  - so  no plot spoilers here..
keep well, everyone.
Posted by david in suffolk at 23:29 13 comments: