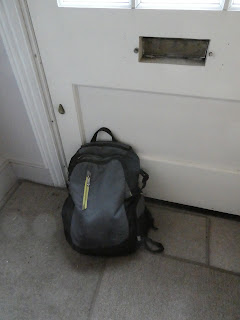 The slightly grubby rucksack in the picture ( it's been carried between my house and my partner's,  weekly for several years ) contained my 'work PC' and phone- a nice man from DHL came to collect it last week, finally ending my 24 years supprting  IT systems for a major UK supermarket.  Five different employers in that time, mind you - oh, the joys of outsourcing and  'TUPE' transfers.  What does this mean? In the short term,  an email bombardment from an outplacement agency re:my 'jobsearch',  and would I please upload my CV? To which I answer 'what CV?'  I haven't had a job interview since 1997... I think I'm going to be a disappointment to them.

It's surprising just how much mental effort and 'bandwidth'  is required by the process of  being made redundant, and the result is clear from the reduced frequency of blog entries here and the total absence of gaming in the past few months. But now it's done, I think I may have a bit more hobby time, which is very welcome.  I need to have a bit of a think about how to use that - expect some sort  of  'thinking aloud' post on future plans quite soon.

The good news is, some gaming has indeed occurred - the first instance of which was a 'Command and Colours' Austerlitz extravaganza,  which has been covered by the host, Liverpool Dave, on his St Cyr on Wheels blog,    It was a brilliant  afternoon, and a great pleasure to meet fellow blogger Nundanket again too. Cheers guys!

I've been mssing getting actual figures onto a table too, and I wanted a quick and easy way of getting back into that habit. Something 'Fast Play', on a small gaming area ( say, a 3 by 3 grid? ).. I think we can see where this is going, Having prepared a pinboard gaming 'table' for 'The Fast Play 3 by 3  Portable Wargame' not long ago, it was high time to give it a try. Everything required was to hand, in Bob Cordery's recent The Portable Wargame Compendium, as follows: 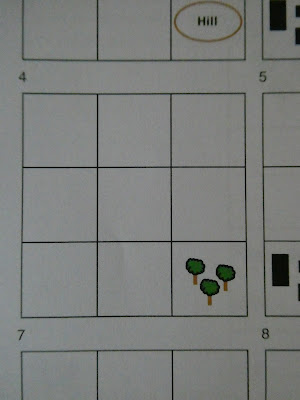 Just one wooded area, on the defender's baseline, right flank.

(ii) Forces : page 85,  Army Composition by Mark Cordone. Each side will have six units plus a commander, simply roll a D6 for each and select the suggested numbers of common unit types. I used my Seven Years War forces, and rolled as follows:

Prussians rolled a '6' and got

- One Field Gun and Crew.

Austrians rolled a '1' ,  resulting in

- One Field Gun and Crew

Plus one commander for each side. All units have 2 SPs ( Strength Points ) and I decided that all units would be 'average' quality. So, an interesting mixture!

Lastly dice for attack/defence, and the Prussians were deemed Defenders - which seemed quite appropriate given their infantry-heavy array. Both sides set up, as seen below: Prussians on the right. The units are set up on their respective baselines, with some held back in the 'Reserve' areas behind.   Prussian infantry covers the whole front, with their Uhlans held in reserve: Austrians have their Cuirassiers massed on their right, and Light Infantry  ready to skirmish in front of the woods on their left. Attackers move first on Turn One, after that dice for initiative each turn. So, Austrians to start Turn One.  And that's where we'll leave it for now: a full battle report will be the next post on this blog. Meanwhile, keep safe, and well, everyone.

UPDATE : thanks very much to all for sympathetic comments re: the redundancy. It wasn't voluntary, but it wasn't entirely unexpected either, and I think I am at an age and situation where I can accept it and move on to a new stage in life.  It is rather strange thinking 'what to do today?', and little things like not having to finish my morning walk ( habit acquired in lockdown) in time for the 'daily stand-up' meeting!

One very sad aspect, though: back in May, on a day walking by the Thames near Richmond, I had a very useful conversation with an old friend, Kevin,  who had much experience of working through TUPE/redudancy processes, also in the IT sector, from both worker and manager point of view. What I mainly got from him was 'don't take it personally, don't get angry, they are only working to a budget, good luck to them if they are making a mistake, on their heads be it. Make the best of it, take the (hopefully  generous)  payout and enjoy life'.  That helped me quite a lot, and I looked forward to meeting him again now, to tell him I had gone through the process OK and was looking forward to the future - he had himself managed to retire about 6 months before. But that was not to be, Kevin passed away suddenly in June, and today his family and friends gathered to mark his passing and remember him. Cheers, mate, and thanks, I won't forget.

Fnurban #15: An Imposter at the Festschrift

On Tuesday I was lucky to be able to attend a rather special event - and all thanks to the generosity of  most excellent fellow blogger Nundanket .  This was the 'Festschrift'  presentation organised by Helion & Compamy in honour of  Professor Christopher Duffy,  which launched  their new publication 'The Changing Face of Old Regime Warfare: essays in honour of Christopher Duffy'. 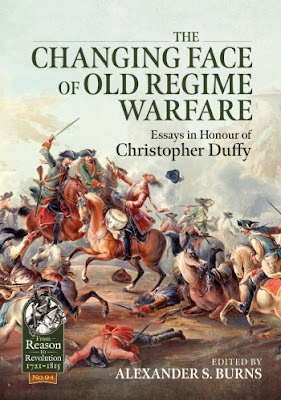 Perhaps I should add this ( from Wikipedia ) "In academia, a Festschrift (German pronunciation: [ˈfɛst.ʃʁɪft] ) is a book honoring a respected person, especially an academic, and presented during their lifetime. It generally takes the form of an edited volume, containing contributions from the honoree's colleagues, former pupils, and friends. Festschriften are often titled something like Essays in Honour of... or Essays Presented to... ."

I'll admit I hadn't heard of the concept before!  Here is Helion's description of the event :

For over half a century, Professor Christopher Duffy has produced ground-breaking anddefinitive works on a wide range of military history topics. Perhaps best-known for hiswork on the armies and campaigns of the mid-eighteenth century, with books on Prussians,Austrians, and Jacobites, he has also tackled key battles of the Napoleonic era and even theclimactic closing campaign of the Second World War in Europe. Throughout, his workhas taken deep research and scholarly rigour and made it available to a general audience. As Helion continues to reprint some of Christopher’s best-known books, we are also seeking to pay tribute to the influence that his work has on the generations of historians who have followed in his footsteps.The result is a Festschrift edited by Dr Alexander S. Burns and containing 16 essays by historians from across Europe and North America that pick up on themes from Christopher’s work and build on his legacy to add new detail to our understanding of warfare during the eighteenth century and beyond. In an exclusive launch event, generously supported by the British Commission for Military History, the Festschrift will be presented to Christopher in the Field Marshals’ Room at the Cavalry and Guards Club on Tuesday 5 July, with talks being delivered by both the volume’s editor and its honouree.Places are limited to 40 guests only

Nundanket is a very big fan of Proffessor Duffy's work and was 'over the moon'  to be one of the 40 lucky ticketholders, but then sadly 'sick as a parrot' when it transpired that this clashed with his family holiday. He kindly offered the ticket to anyone else able to take it up, and with some trepidation I took him up on the offer - being by no means a Duffy afficiando, I did feel  quite an imposter. I have read and very much enjoyed a few of his books,  but I wouldn't call myself an expert!

The venue was an interesting element - no less than the Cavalry and Guards Club in London's Piccadilly. If I wasn't an.imposter among Duffyists,  I certainly would be at the Cavalry and Guards!  Fortunately I did think to check the club rules - jacket and tie required, of course. I haven't dressed even remotely smartly since a family wedding last year, but I was quite glad to do so. ( another chap arriving at the same time as me was stopped by the staff and asked to put on a tie - they had a handy box of 'spares'! ).  I wasn't going to risk ejection by getting my camera out, but you can get a good idea from their website: https://cavgdsclub.co.uk/  -  it's not too scruffy.  Curiously enough given the exclusivity,  no-one actually asked to see my ticket - one must just look the right kind of chap.

And so to the event itself : a rather pleasant, informal evening. Andrew Bamford of Helion hosted, and we were given short speeches by three speakers including Alexander Burns who has edited the book, and William Philpott of the British Commission for Military History (BCMH) who were co-sponsors of the event, Professor Duffy having been a founding member back in the mists of time - it seems no-one can remember exactly when. A third speaker's name escapes me ( sorry - I think I'd read another club rule about not using notebooks! ) , but was a colleague of Christopher's when lecturing at  Sandhurst. All three were fulsome in their praise, of course.

Professor Duffy is 86 now and uses a wheelchair, a little frail of appearance and voice, but still entirely 'with it' and also gave a short address, with some quirky anecdotes - he seems to have made a speciality of visiting archives behind the Iron Curtain, long before the end of the Cold War, surprising for a Sandhurst man? Also of meeting a notorious WW2 character ( who was subsequently murdered ), and told of being chased back to an army Landrover by an angry pack of 'Catholic' dogs  during a research trip to Northern Ireland in the 1970s.  A man of surprisingly wide interests and experiences - and still busy thanks to Helion. I think they  said he currently has no less than  three books 'on the go'.

The speeches took up about 45 minutes, giving way to informal mixing and  chat for the last hour, rather than overtaxing the guest of honour with a formal 'Q&A', and that seemed fair enough.  I wasn't so forward as to introduce myself to the great man, but very pleased to have seen and heard him.I did have a pleasant chat with the chaps from Helion, and also with representatives of the BCMH  ( their website:  https://www.bcmh.org.uk/ ), including  Andrew Grainger and Tim Gale.

Since I am soon going to be having more time on my hands ( I think it's called 'leaving the work force' ), I have been thinking I might be interested to try to do some 'proper'  study of Military History - any suggestions welcome -  though I wouldn't be able to run to the fees for taking a degree-level course.  I was unaware of  the BCMH and am now thinking it might be interesting to join - they do say 'enthusiasts' are welcome, not only professionals!

Finally I was forward enough to introduce myself to Professor Gary Sheffield, using the old 'I know your friend Bob Cordery' line.. He fell for it  ( well, it is true! ), and  is clearly a thoroughly nice man ( and I thought his book 'Forgotten Victory'  about 1914-1918 was brilliant ). It was great to meet him, albeit briefly, and that completed a really interesting evening. Many thanks to all concerned, especially Mr. Nundanket !

p.s. Reader, I bought the book.

Keep well, and safe, everyone.