Well now, where were we?  Several weeks seem to have gone by, and nothing from The Ragged Soldier - sorry about that.  I'm afraid real life ( work, mainly ) got in the way. As a result, no gaming took place, but I did manage some reading,  and some acquisitions, that will feed into future campaigning. 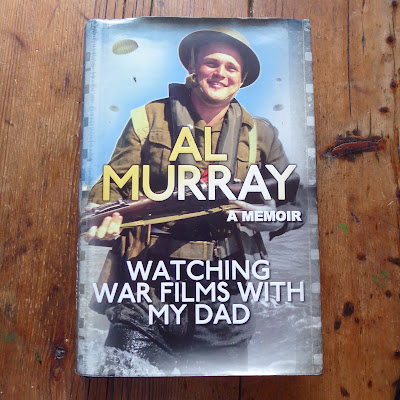 Al Murray's 'Watching War Films With My Dad' was a charity shop find ( for £1! ) which turned out to be a great fun read.  It's a sort of memoir - taking us from Al's WW2-obsessed 1970/80s childhood with Airfix kits and Action Man ( shades of Harry Pearson's 'Achtung Schweinhund' )  up to his attempts to present  military history to his own children.  He's a massive enthusiast for military history, he positively fizzes with it, with the result that he jumps  from topic to topic with dizzying speed. Obviously there are  a lot of jokes too,  but  (as listeners to his 'we have ways' podcast will know )  he is very well-read and knowledgable.  I was particularly interested in his views on Arnhem, which I confess I have little knowledge of myself  -  and of course the film 'A Bridge Too Far' gets a fair amount of discussion in the book. Did they really use Leopard tanks? Oh no!  He doesn't seem to have tried wargaming , though - should someone be inviting him to a show? 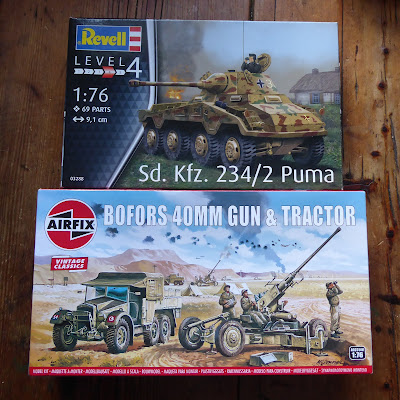 Having enthused about a year ago over the joys of the local model shop, I'm afraid I didn't get back to Model Junction in Bury St. Edmunds until the other week. But I found them trading OK, and as friendly and helpful as ever.  They have a pretty wide selection of modelling paints ( at least 4 or 5 brands ), and a room full of plastic kits. I've been wanting to add some anti-aircraft capability to my 'D-Day Dodgers' Italian campaign forces, so the Airfix  Bofors AA gun will do nicely, and I couldn't quite resist the Sd Kfz 234 'Puma'  for the Germans. Worthy additions to the 'plastic pile',and it's about time for another go at a WW2 game and a trial of Bob Cordery's 'Portable Wargame'  rules for aerial attacks and AA guns. 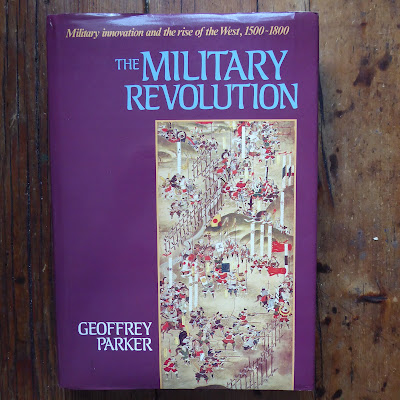 Another great book find was courtesy of an antique shop in Lavenham which includes a couple of shelves of history books curated by someone who clearly has a military bent ( so to speak, missis!) - and there was Geoffrey Parker's 'The Military Revolution'. I know I'm about 30 years behind on this one, though I do have his books on The Thirty Years War and The Army of Flanders and the Spanish Road - the latter read a memory-wiping long, long time ago.   As a paid-up member of the Pike and Shot Society, I'm really looking forward to reading this and bringing my knowledge of theories of military history bang up-to-date - albeit the 1980s date.. 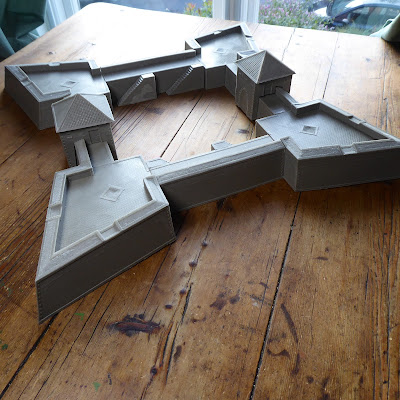 One aspect of The Military Revolution being the Trace Italienne and new fortification techniques culminating in Vauban's  formidable legacy - so it was a very pleasant surprise to coincidentally  receive a splendid gift, from a modest and retiring fellow blogger, of a seriously impressive resin model of a Vauban fort!  It's actually 15mm scale, I am told, but I think it should pass muster in  my Seven Years War campaigning, on the principle of 'under-scale' buildings and scenery. I can see it as a small fortified outpost being fought over  in my central European backwater, or cunningly deployed along the edge of the table to suggest a section of the walls of some larger defended place. Whatever, I am very chuffed indeed with this lovely piece of generosity. No payment was required - I will compensate with a suitable charity donation, perhaps to MSF. 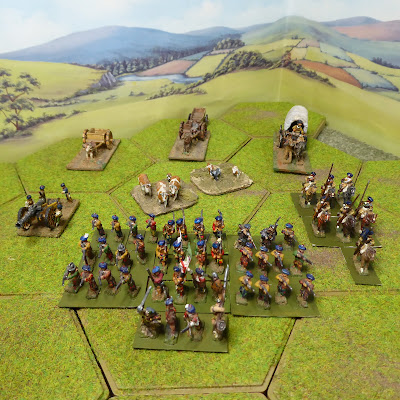 Finally, an update on another generous gift, which I had received from RossMac of 'Battle Game of the Month' fame.  Here is MacFarlane's Scottish regiment of foot, with their associated troop of 'border horse'  Lancers , their  prized regimental cannon, supply wagons and self-propelling food supplies ( i.e. livestock ! ). I've given the foot and the horse new bases to fit my system, and given the horse back their missing lances, but left Ross' 1970s paintwork untouched, it's just fine as it is. The infantry have a preponderance of musketeers and very few pikes, so they may find themselves used as 'commanded musketeers', but there are some splendid axe- and sword-wielding highanders, and even a bagpiper! Also a couple of kilted  musketeers with socket bayonets, who look distinctly 18th century, but I couldn't separate them from their fellows after the long voyage,  so they stayed in the ranks. Their comrades may be bemused by 'Hamish and Dougal, with all  their new-fangled ideas'.

The bases are just thin card, since the plan is to fit magnetic strip underneath, and use steel paper movement trays, which will add to the thickenss. Maybe I need to texture them a bit, to match Ross' bases for the wagons, gun and livestock. Though I am an adherent to minimally plain basing normally, a bit of texture would be true to their original spirit, I think.  Now they will be needing an excuse to get to grips with the Imperials, or the French, depending which side offers the best pay, of course..

That's enough for now, I'm glad to have got back onto the blogging bike, so to speak, and there's lots of gaming posibilities to be thinking  about in the near future.  Meanwhile keep well, and safe, everyone.

* title loosely inspired by that good old standby of adventure-story writers - 'Alarums and Excursions', of course !  I'll get my coat..