Having been frustrated in their attempt on Tragers Grat, but now  receiving some reinforcements, the Prussian forces of Eric von Kleist have resolved on taking another route into Austrian territory - more directly, straight down the main highway. Von Kleist commands the advance guard in person, determined to drive his troops on at their best speed to achieve surprise.  His vanguard comprises six units, as follows:

As previously, strengths are for Bob Cordery's rules for The Portable Napoleonic Wargame, with my home-grown tweaks for 'Portable Seven Years War'. All troops rated Average except the 'Rifles' - Elite.  To save on  book-keepng, each base ( of 2 infantry or cavalry, 1 sharpshooter,  1 gunner  ) is a Strength Point, which can be removed to show losses in an nice 'old school' manner.   A handy little force, unencumbered by slow-moving guns, with decent infantry firepower and a small cavalry strike force.

On the Austrian side, all is hurry and confusion as forces are hastily gathered to meet the Prussian incursion. General Dachs finds himself with six units also:

All the above rated Average, except the Grenze foot, boosted to Elite by their feats of arms at Tragers Grat. Those guns give Dachs' force some punch and should  powerfully aid his defence.

Dachs knows the importance of a particular crossroads, at a place known as Vier Arme. Von Kleist's force will surely reach the place, but when?  Dachs has been able to dispatch one battalion of his Jagers and one gun to the vicinity.  He personally leads another two units - his Grenzer foot and Hussars - down the road from the North, while the final battalion of Jagers and the second gun are approaching from the West, though they are a little more tardy in their march.

Here we see Von Kleist's column on the march: in his impatience to advance, he seems to have neglected to send his cavalry forward to scout the country up ahead.

While just South of the fateful crossroads, the Austrian advance party takes up position astride the road, flanks secured (they hope) by a wood and lake.
(  I will admit, that 'lake' was almost as hastily improvised as the Austrian defence - from some gift-wrap paper - but it rather grew on me! ).

Keen readers of  'One Hour Wargames' by Neil Thomas may have spotted that this is his Scenario number 11: 'Surprise Attack' (you may also deduce where the name 'Vier Arme' comes from, too).
Forces were chosen using the book's random selection chart, but I confess not entirely random :  I diced for two armies,  then decided which looked most suitable for defence and attack.

The Prussians entire force will appear via the road from the South on turn 1, while two further units of Austrians appear from the North on turn 3, and their final two units on turn 6 ( Neil suggests turn 9, but that seems harsh!). There is a special rule that 'neither side is aware of the other's precise location or strength. Accordingly, no charges may be declared on Turn 1',  which we will follow. Even with that rule, it looks a daunting task for the Austrian outpost  units, outnumbered three to one from the start..

So then, as the morning mists begin to clear, Von Kleist's advance column nears the crossroads, when suddenly a cry goes up :  'The enemy!'   And so,  the combat of Vier Arme begins..

Fnurban #1 : We interrupt this program..

I was sent this, shortly after Prime Minister Johnson's address to the nation tonight: 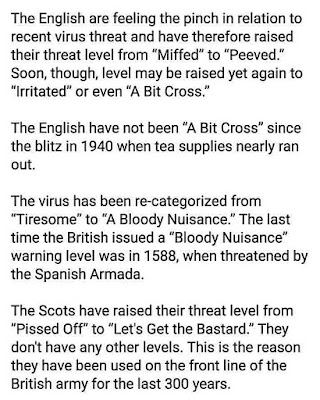 ( with apologies to all 'North British' readers )

Email ThisBlogThis!Share to TwitterShare to FacebookShare to Pinterest
Labels: Fnurbans

Having come through our baptism of fire ( in Action! ) and thoroughly  enjoyed the experience, I am encouraged to continue with the adventures of Generals Dachs and von Kleist and their somewhat improvised forces. But how to go about it?

What I need now are further situations in which  our plucky metal protagonists will join battle:  and I hope, not just arbitrary  'line em up and roll dice' situations.   In a word: scenarios.  I'd also like to establish some sort of narrative to connect  the scenarios and give a reason for each battle. Not a fully-worked out, detailed campaign with maps - it's rather early days for that. But a series of linked actions, where the outcome of one influences the initiation of the next in some way; that shouldn't be impossible.  And in this I am fortunate to have plenty of material to draw on.  Over the years I've acquired some books which should  come in very handy:

Age before beauty - certainly in terms of the cover illustations!   First up must be the original 'Scenarios for Wargames'  by Charles S. Grant, from about 1982. I'm sure these were developed from his 'Table Top Teasers' series in 'Battle' / 'Military Modelling' magazine, and included here is 'Reserve Demolition'  which must have been 'Teaser' No.1 - I'm sure I still have a much-thumbed copy of the magazine it featured in!  Not  only that one, but the book has no less than 52 suggested scenarios, 'one for every week of the year' as the cover helpfully points out. By the time you'd played all those, you would have been ready for the next book - 'Programmed Wargames Scenarios'. Now this took things to another level - each of the 18 scenarios ( plus two mini-campaigns ) can apparently be played with one side  or even both sides 'programmed' -  "whose inital dispositions, orders and responses to battlefield events, were not known to the player beforehand".  Given that this is years before most of us had the use of personal computers, this was heady stuff.  I say 'apparently', because I admit that I don't think I ever summoned up the courage to actually play any of these!  Looks interesting, though, and aimed directly at the solo player.


Next,  the master of Scenarios teamed up with the late and much-lamented Stuart Asquith for 'Scenarios for All Ages' from 1996 , though I acquired mine much more recently. Another  'every week for a year' set of 52 scenarios , which Charles Grant  assures us are all different from those in the earlier book. Very much a horse and musket slant,  "For simplicity, the relative forces have been considered as units of infantry, light infantry, cavalry and artillery" - perfect for my purposes. Just as with the previous volumes,  every scenario complete with outline of the aims, map and ground, opposing  forces, deployments, success criteria and special rules.


Finally, and certainly not the least - Neil Thomas 'One Hour Wargames'. I suspect we either love or hate Mr Thomas - I am generally a fan.  His ability to boil down a period to its  essence , then create the simplest possible rules to reflect it, is just brilliant. Even if you don't fancy the rules, here are another 30 decent scenarios - well worth the price.  And two major advantages for me;  first, they assume a playing area  only 3 feet square, which is exactly what I have right now;  second, forces of typically  6 units each side - ditto.  'Scenarios for All Ages' assumes a 7 feet by 5 table -  well, maybe I can shrink it down?  But Neil has done the work for me. I think on the whole, we are likely to start with Mr Thomas' scenarios and Bob's Portable Napoleonic  ( suitably tweaked for 7YW ) rules.

Now, having been narrowly rebuffed at Tragers Grat , what is Von Kleist's next move?

Probably too many words in the last posting, so let's just have a few pictures this time. I'll show the whole collection of painted Eric Knowles figures that I acquired,  thanks to David Crook.

First the Austrians - who are rather outnumbered, and so augmented by some Prussian guests. 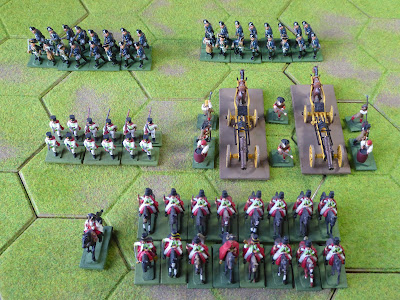 General Dachs has at his disposal :

In total 16 Cavalry,  40 infantry and 2 guns.    Names are as given by the late Eric Knowles, carefully labelled under their  bases, and who am I to disagree?

They could do with some proper Austrian infantry - I do have some, also from Eric's collection, but as yet unpainted. Given time, they will join the ranks ( many of  the unpainted figures had painting notes on slips of paper in the boxes naming the regiments they would represent, and it would seem nice to honour Eric's intentions ).   In the meantime, we hope the Jagers have been getting  accustomed to the delights of Vienna, surely a welcome change from dour Berlin..

Meanwhile the Prussians have their  von Kleist Frei Korps and friends : 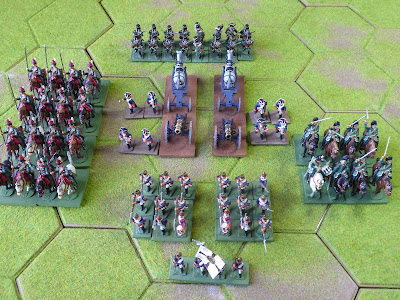 I think with these forces, I should be well able to run some sort of minor campaign ( albeit purely imaginary )  set in the marginal borderlands somewhere in mittel Europa,  and perhaps try out a few different sets of rules.  There are certainly enough troops here for very decent 'Portable Wargame' forces.

One of these contingents missed out on the action at Tragers Grat : the Prussian '44th Fusilier' regiment was still marching to join von Kleist.  In fact they were what David described as a 'Brucie Bonus' , for which I am very grateful, as they are splendid: 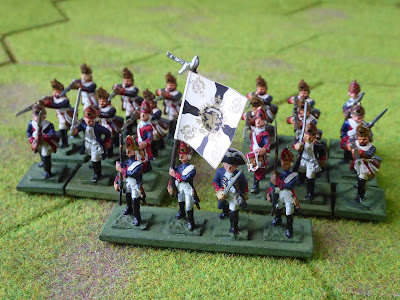 Eric's very thorough labelling under the bases organises them into 1st and 2nd Battalion, each of 9 figures, and a 4-figure 'Regimental HQ' .  They will conveniently make 2  'Portable Wargame' units, and under other rules may fight as a unified regiment.

I think the opposing forces have rested and recouped their strenghs after the recent  first encounter, and will soon be meeting again, on a new battlefield..