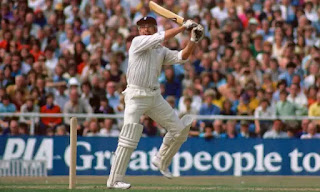 "..And that's his 50 up, a good solid start"... The opener raises his bat in casual salute to the gentle applause rippling around the ground, adjusts the visor  of his cap against the afternoon sun, dabs at some imagined bump on the ‘track’ at his feet  and prepares to face the next  delivery with the confidence of having got his eye in...

Not sure why I went with that image, as  I was hopeless at cricket at school, couldn't catch, couldn't bowl, rubbish batting! Same with all sports, to be honest - much happier with my nose in a book, and so I have remained.  But anyway, here we are at post number 50, which I am pleasantly surprised to have reached.  This blog started in early February 2020, a  bit more than a year ago , and therefore not quite the  one post a week which I'd like to aim for, but still quite a satisfying strike rate given 'time and space' constraints.   A great big thank-you to all of you who have dropped by, the 28 of excellent taste who have opted to 'Follow',  and especially those who have left so many friendly and supportive comments - you have been a great inspiration to me to keep posting!

It seems a good time to pause and reflect on hobby activities, and think a bit about what might come next. I wouldn't go as far as saying I have an actual plan,  but  I do have a few  ideas I'd like to pursue.

In the Seven Years War period, the purchase of some of the late Eric Knowles' figures via David Crook , and the arrival of Bob Cordery's 'Portable Napoleonic Wargame'   was the stimulus that go the whole thing started - instant armies, and simple but elegant rules, and we were off! It has proved eminently 'do-able' to stage interesting and fun games in a space of no more than 3 feet square, with brigade-size forces, and the aim is to continue, and  gradually add to the forces  as spare (painting) time permits.  Using the 'Soldier King' boardgame as a fairly loosely-defined  basis for a fictional  campaign  has worked well, and I will try to keep it going.

There are still plenty of Eric's figures awaiting painting  - some interesting Austrian border troops, for example, which should fit in nicely to the slightly 'backwater' nature of the campaign. The Prussians will be reinforced  by  own vintage Minifigs  Line Musketeers, and  the fantastic recent  gift  of Spencer-Smith figures from Neil Patterson has set me thinking of a 'third force'  representing Saxony - for which the recently acquired  books 'Between Scylla and Charybdis' ( vols 1 and 2 ) by Marco Pagan should be a great help.  I envisage the Saxons as somewhat fickle and  unreliable allies/opponents  for either of my  Austrians or Prussians..

And who wouldn't want to field a unit of these colourful  Saxon Chevauxlegers / Dragoons, as illustrated in the first volume? 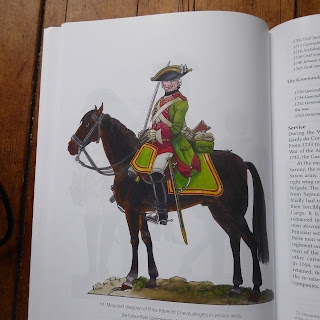 For the 'D-Day Dodgers'  WW2 in Italy,  there has only been one game so far, but I am aiming to bring them forward again soon.  I've been doing a bit of reading around, and forming some ideas of how I'd like things to develop. Having started from rescuing childhood Airfix 20mm figures, I was happy with a general 'British vs. German' theme, but  I wanted to do something different to the Normandy 1944 scenarios that seem to dominate.

The Italian campaign has certain advantages, to my mind:  (i) 'mid-war' setting of 1943 onward, allowing a spread of equipment and not just the late-war classics;   (ii)  much more varied terrain, from scorched summer Sicily, to coastal plains, to maybe even snowy mountains;   (iv) many and various nationalities, especially in the Allied forces, and perhaps even  Italians on both sides! (v) not dominated by armour,  more of an infantryman's war - I rather recoil from some WW2 games where the tanks are seemingly wheel-to-wheel.

A post in the near future will look at the recent reading which has got me thinking, and perhaps put forward some sort of plan, however vague..

Last but not least, especially given the title and sub-heading of the blog, I think it's about time for  my Pike and Shot forces to step up.   When I first thought of returning to wargaming, these were going to be my way in, but the Eric Knowles Seven Years War stuff rather overtook them - they need a bit more effort ( in the way of bases, flags, organisation and some painting )  to bring into fighting trim.  I am determined to try, though, even if this turns out to be a bit further in the future. Meanwhile I had a quick review of forces, and can show the current state of the army of   By the Grace of God, Most Christian King of France and Navarre, Louis XIII:

Appropriately enough for an army of the Thirty Years War,  most of these are at least thirty years old; 15mm scale, Mikes Models/Essex,  a few Minifigs, and if you  look carefully you may see there are even some Peter Laings in there.  Painted very badly by my younger self and determinedly gloss-varnished, but part of my memories of younger days, and as such  I will keep them just as they are.  With perhaps typical avoidance of the mainstream, I resisted the ECW or the salvee-firing superheroes of Gustavus Adolphus' Swedes, and opted for a French vs. Imperialist/Bavarian scenario - though with maybe  a few too many 3/4 armoured cuirassiers! Some of these  probably first took the field under the George Gush WRG Renaissance Rules, and Terry Wise's  ECW/30YW set, back in the 1980s.

In recent years  reinforcements have been acquired ( and some even painted )  from Essex Miniatures and Peter Pig, such as the 'Chevauleger' style cavalry at the front.  The flags were done with coloured pencils, I think, and sorely  need upgrading, and a bit more consistency in base colour wouldn't go amiss, but I think it's time they saw some action, and there is an Imperialist host of similar size being made ready to meet them..

I think that's plenty to be going on with; let's hope I can follow up on some of these ideas. I think that this blog is probably the best motivational tool in that respect - having promised here to post about an upcoming battle is a powerful incentive to actually play out the game on the table, and trying to post regularly encourages regular hobby time, in order to have something to post!  I don't think I would have done half as much painting/gaming etc without the blog to spur me on. And of course ( and by  pure coincidence of timing) in this strangest of strange years, it has been a lovely way of reaching out to the world beyond the locked-down home, giving and receiving encouragment to and from far and wide, and having something to think about besides the wretched news.  I hope for  and expect the news to improve eventually,  but in the meantime  this has been a great morale-booster!

I think we'd better see how things have panned out at Rahden in the next post: meanwhile, keep safe and well, everyone.