TYesterday I paid a visit to Gillingham, Kent for the 'Broadside 2021' show staged by Milton Hundred Wargames Club - and a thoroughly pleasant day it turned out to be. 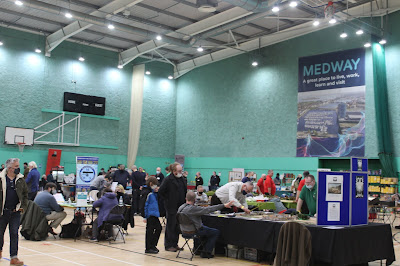 The venue was the Medway Park Sports Centre, a new location for the show, and it was a big improvement on the old Sittingbourne venue, which was quite small  ( and when I went their in 2019 they had to open doors for ventilation, not sure that would have been good for Covid and in December!).   As you can see, the new venue is a cavernous sports hall, there was masses of space and ventilation was fine.  I was also impressed by the level of face-covering, quite a contrast to last month at SELWG and  Salute where hardly anyone ( myself included ) was covered-up. Our new 'friend' Mr.  Omicron has changed people's attitudes, it seems.

Enough of that, on with the show. I met my good friend Dave 'St Cyr' at the venue,  and we fell easily into our usual routine of  'games, then lunch, then traders'.  It's not a large show, and that made it all rather relaxing, plenty of time to see the games and chat to the players if we felt like it - I always feel a lot  of time pressure at Salute!   There were 14 club  games listed on the program, plus some trader's participation games, an in contrast to Salute I think the no-show rate was very low, or maybe even zero - good news.  I thought the standard of games was pretty high, there were a lot of really nice-looking tables, and plenty of time to watch and chat.

I think our favourite was  'The Battle of Montenotte, 1796'  staged by Postie's Rejects; a refight of Napoleon Bonaparte's first battle as Commander-in-Chief  of the Army of Italy.   Dave was always going to be interested in this, he's a complete Napoleonic nut!  It was an interesting and 'different' game, being more 'Revolutionary' Wars  than 'Napoleonic', with the French mass-conscript columns taking on the Ancien Regime  Linear warfare Austrians - plus, I really liked the wooded North Italian terrain.  We were warmly welcomed by the Rejects and given a thorough and interesting explanation. We went back at intervals to see progress - which went as per the historical event, with a convincing win for Napoleon. The Austrians always looked to have a tough gig, with French columns emerging from the woods on all sides.

Several other games looked good, and here's a selection of the ones I managed to photograph:

Real Time Wargames are always interesting, and were only 2 years later than the Rejects with their 'The Year of Liberty: 10mm Irish Rebellion 1798' mini-campaign game. One of their trademark  'twists' being  that  players represent the various British district commanders, who are in fact rivals trying to best each other, as much as the rebels.   Again, we were made thoroughly welcome and given an enthusiastic explanation. I think they said they had completed four games in the course of the day! 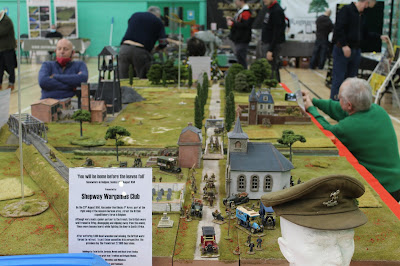 Shepway Wargames Club put on an impressively  large 1914 game  'You Will Be Home Before the Leaves Fall' , played down the length of a long table, complete with Taube and Bleriot spotter planes flying over the battlefield. 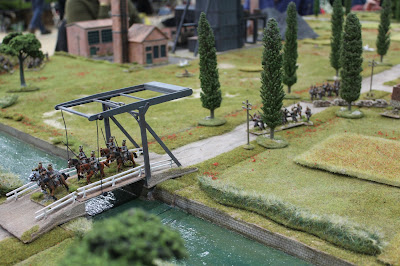 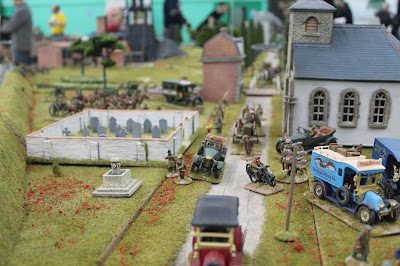 Old Fritz  appeared to be doing pretty well, with lancers securing a vital bridge, as the local populace (including a party of nuns)  rushed to escape, and presumably blocked the road. 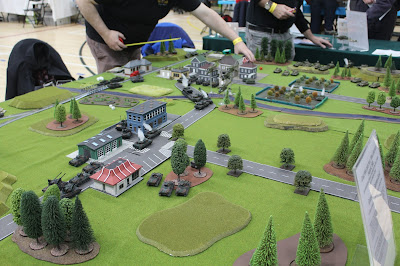 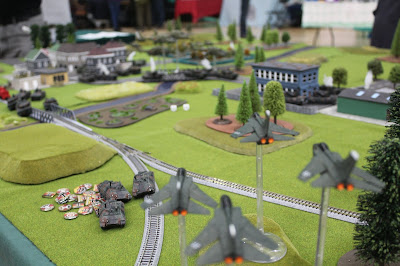 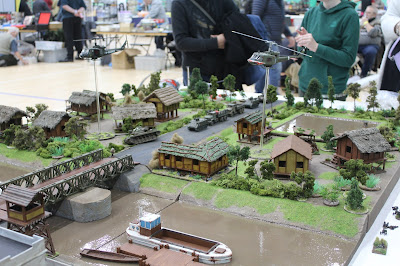 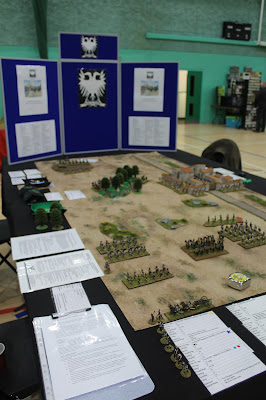 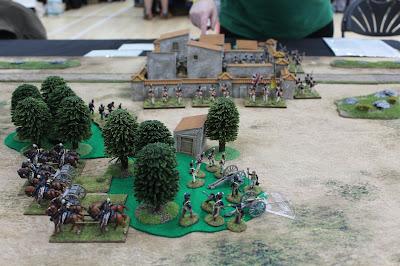 That's all the games I photographed - I'm slightly embarrassed to say I omitted to get pictures of the game which was declared 'best in show' - I think that was Friday Night Fire Fight with 'Warmachine Invason'. Sorry I missed 'em!

After a quick sandwich and a chat,  we toured the traders -  I have to admit that they weren't exactly looking rushed off their feet by the afternoon, so one felt duty bound to spend a little!

I went for transport for my 7YW forces and  housing for 30YW,  courtesy of Parkfield Miniatures (metal wagon) , 1/72nd models ( HaT baggage wagon )  and Blotz  ( medieval house and shop ). I like a good supply convoy scenario, so  they'll do nicely. 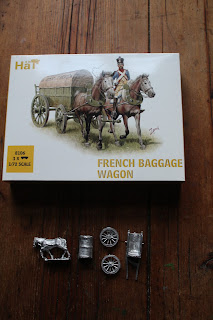 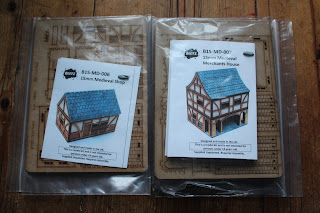 Dave picked up a bag of trees and some cardboard buildings from the Bring and Buy, at a bargain price, so we may be a step closer to seeing his Napoleonic troops take to the table.  Finally  I sadly failed to  find any excuse to buy from  this stall - aimed at Live Action Role Players, it seems. 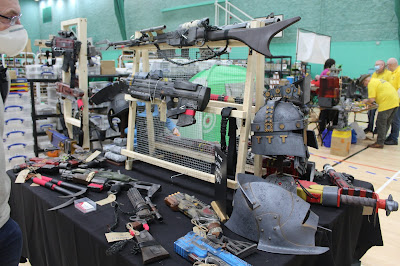 And that's about it. I had a thoroughly pleasant day, it was relaxed and friendly, well-organised by the  Milton Hundred club and a much improved venue. I wonder if the attendance was maybe  a bit sparse, which is perhaps not surprising in current circumstances - the large hall did not seem crowded, but it would have easily soaked up a big crowd without feeling anywhere near rammed.  Anyway, we saw several very nice games and enjoyed talking to the players,  and  made a few essential purchases, can't ask for much more.  A slight bonus for me is the nostalgia factor, having lived in Gillingham as a small child, and then grown up in Sittingourne, home of the Milton Hundred club ( I even had a chat with some chaps from local Rainham Wargames Club, of which I was a teenage member c.1976-81! ).

The organisers  have already scheduled Broadside 2022 for June, and I will put that in next year's diary (when I get one!). In the summer, you could probably do the show,  and then visit the historic Chatham Dockyard, just down the hill.. Let's hope life is a bit better by then -  meanwhile many thanks to all who worked to put on yesterday's show, and all who ran games and tradestands, hope to see you next year! 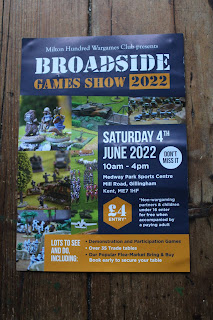 In the meantime keep safe, and well, everyone.

**UPDATE** : more and much better pictures in Big Lee's report, and he says the organisers told him attendance was pretty good, comparable to past years. The larger hall was clearly a good move!