Sad news for the wargame blogging community this week, with the ( I hope temporary ) suspension  of Norm's brilliant 'Battlefields and Warriors' blog.  He says  "I have come to realise that a far too significant proportion of my spare time / behaviour is being drawn to the screen to the point that other areas of life / wargaming relatively diminish."  Also as an example, he mentioned his latest post about boargaming Ligny, which was 4000 words long "and yet by today had garnered just 5 different voices in the comments". That last point makes me feel particularly guilty. I have hugely enjoyed Norm's blog since finding it, especially his fantastic extended game reports, but I haven't very often commented. I think that's probably been at least partly because I haven't felt able to add much that would match up to Norm's very high standards and wonderfully thoughtful writing! Of course one could just say 'great post, thanks!' but there's a limit to how often you can do that..  Ironically I had only just got round to reading the Ligny post, and was thinking about leaving a grateful comment (yes, honestly!), when Norm announced his break and disabled comments on his blog. Sorry Norm!

I think Norm makes a very good point about screen time vs. 'real' time : there are so many blogs out there, let alone Facebook groups, YouTube channels, etc etc, one could just spend all one's spare time on them and never do any actual gaming, let alone post to one's own blog! In Norm's case, he must also spend quite a large amount of time commenting on other blogs, again always giving greatly perceptive and thoughtful input. On this blog, I feel I've been amazingly lucky with the quantity and quality of comments I've received from the start, and I'm very, very grateful to all who have contributed. I think one should probably write a blog mainly for one's own enjoyment , or at least 'what sort of thing would I like to read?' , but it's always a great encouragement to get some nice comments - and it must be rather depressing to put the effort into a blog post, and get no response, as one sometimes sees. Having said that, despite the prevalence of 'bots' skewing the statistics, one can also be encouraged by the numbers of views on the blog - and I note that Norm said he was getting 12,000 views per month, to which all I can say is, wow! I am really chuffed if I get one-tenth of that number - and thanks again, to all who look in now and again and add to those figures.

Anyway, I do hope Norm's absence is not a long one, and I promise to leave more appreciative comments in future! It was great to see the many positive responses to Jon Freitag's post on the same subject, and I must also mention a really fantastic post, also inspired by Norm's announcement, from Aaron/Prufrock on his 'Here's No Great Matter' blog.  He makes the crucial point that "The important thing is to recognise that a hobby has to be about enjoyment. It can't be about meeting expectations - well, it can be for a while, but that is unsustainable."  ,  and I think that's what we should all remember - it's only a game, after all.  Post on your blog when you feel good about it, enjoy it, and  don't feel under pressure.  If a post is getting too long, you can always split it up, and give 'em a cliffhanger! ( I am seriously guilty of doing that with my recent game report, I know!).

In other news: I  recently ventured out, for the first time in over two years, to 'Drafts' boargame cafe in London's Waterloo, to meet gaming buddies Napoleon Dave and Rupert the Boardgamer, and for a not-too-challenging return to gaming we had a go at 'Soldier King' , the game I've been using to drive my 7YW campaign for this blog. I think I bought it pretty much on first publication, which I see was 40 years ago ( ouch!) , and I doubt if it has been actually played since the 80s ( Simon Bryant and Tony Toms of the Medway area, are you out there? ) .  The cafe was scarily noisy and crowded with 'young persons', which I admit unnerved me somewhat - we debated, was it always like that? (we were always the oldest customers in the place, that's for sure!) But the game was fun, and went well, despite a quirk of the map design that seemed to give a distinct possibility that one player could win the game on turn one!  I failed ( luckily for my popularity!) to  exploit that, and we got through a good number of turns in a 3-hour session, and enjoyed a chat ( over the noise!) and some decent food and drinks - and as far as I know, none of us got Covid, somewhat to my surprise! Thanks, Dave and Rupert. 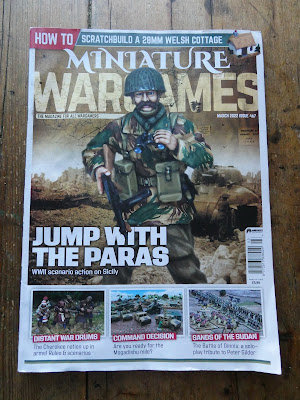 Finally I want to highlight a couple of recent magazines, if you'll indulge me. First up, 'Miniature Wargames' issue 467 ( March 2022 ) - John Treadaway has excelled himself with this issue, there's some really good stuff in it, I think, such as:

(a) Conrad Kinch's regular column,  featuring  a fun '18th Century Kriegspiel' game he has played remotely with his friends using a simple magnetic whiteboard and home-made terrain and unit markers, with a scenario pinched from C.S. Grant - quite inspiring, and emphasises how such setups can be a surprisingly realistic 'command experience' for the players.

(b) a really excellent 8-page article from Peter Warren of Anschluss Publishing, the  'Malati Bridge' scenario for Sicily 1943,  designed for their 'The War on the Ground' rules, but adaptable to other Battalion/Battlegroup level WW2 rules.  I remember their excellent game at 'Salute' lat year, and I quite fancy to get the rules, if only for the sake of reading them!

(c) John's report on the 'Broadside' show in December -  can't see myself in the pics, though! Maybe that's for the best..

(d) Dave Tuck's 'The Battle of the Ginnis, a tribute to Peter Gilder's Sudan Campaign Rules' with the players all being British commanders and the umpire controlling the Mahdists,  or equally playable as a solo game. Interesting ideas, vintage figures, and  Peter Gilder's legacy lives on..

(e) Gerry Sutcliff's 'An Army in a Day' - painting an entire 2mm scale  army in a day. Which makes me strangely tempted to try it, albeit this would be a gratuitous piece of 'mission creep'! Hmmm, 1859 Italy, maybe?

(f) book reviews including Arthur Harman's review of 'Paddy Griffiths' Game of War: Reflections of a Lifetime of Wargaming'  from the History of Wargaming Project. Pretty much  everything Paddy Griffith wrote is worth reading, surely? 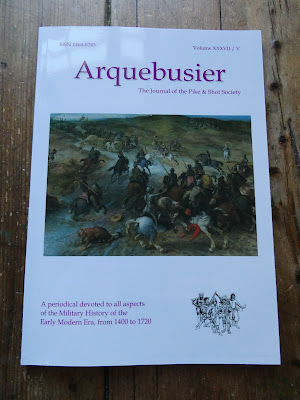 and finally 'Arqubusier' , the journal of The Pike and Shot Society, volume XXXVII number 5. This has been rather delayed, for which the editor apologises ( did I hear a rumour that he had a major IT malfunction? ) .  I like the editorial comment where he says 'The Chairman has given the Temporary Editor a very stern talking to!'   -  the Chairman being  Stephen Ede-Borrett, and the Temporary Editor - Steven Ede-Borrett...

I've not read it all yet, but here's the contents page, with some interesting stuff as always: 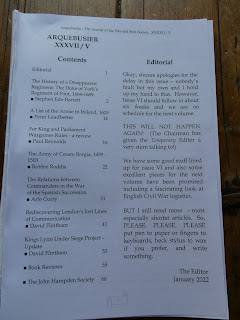 They seem to have a bit more wargame-y content these days, alongside the purely historical. I'll be interested to read Robbie Roddis' account of The Army of Cesare Borgia, and also David Flintham's pieces on London and King's Lynn in the Civil Wars -  I think these may be versions of the on-line talks he has given for the Battlefields Trust .   I do very much  like the P&SS;  the period  was my wargaming 'first love', mainly thanks to Goerge Gush and C.V. Wedgewood, and I really must get it into this blog!  One article I have read is a glowing review  of Barry Hilton's 'Every Bullet Has Its Billet: a guide to wargaming the late 17th Century'.  I may or may not ever game the period, but if the review is to be believed, the book will be well worth reading anyway.

That's probably too much from me, but I have enjoyed writing it, so that's the main thing. Next time, I hope to finally complete the account of the Battle at Zouache - which has been three months in the making.. I can reveal that the actual game has been completed at last!

Until then  keep  safe, and well, everyone, and keep enjoying your hobby - it's only a game, after all.