.".. now try the Indians". That was apparently the advertising slogan for a London building firm with South Asian proprietors some years ago - and good for them, I'm certain it worked a treat ( only bested by a plasterer I once used, whose business card said  'for surfaces rendered' ). But I digress.

'Time and Space' for hobby activities has been in short supply recently, but I hope to get a bit more time now, and I want to  try to get back to some painting. I thought I'd give these chaps  a go: 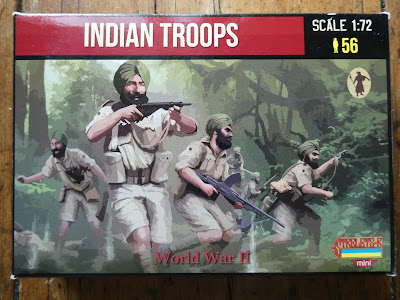 I think my 'D-Day Dodgers' Italian Campaign's allied forces need to reflect the multinational nature of the real thing, and I know that Indian troops made up a significant part of the British Imperial army in Italy, so I reckon these are a must.   I picked up this set at SELWG Last year, and it's about time they came out of the box. 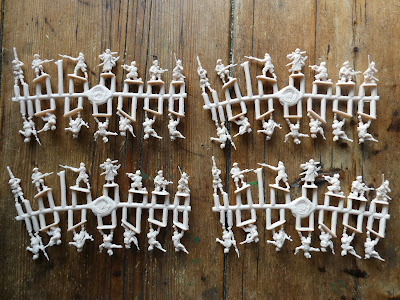 No less than 56 figures on 4 sprues, which is probably more than I will need!  A nice variety of poses, armed with rifles, revolvers, Stens and Brens.  Here's a  slightly blurry close-up: 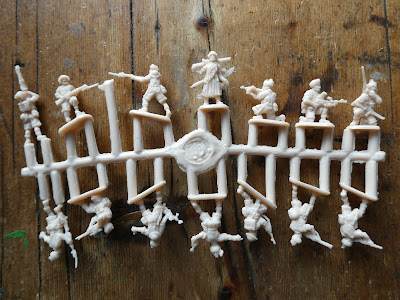 The guy at the top centre looks rather splendid, that bandolier-style belt almost looks like the '12 apostles' of a 17th-Century musketeer. It'll be interesting to see how he turns out.

It will be good to have a go at these - on thinking about it, I reckon these will be the first figures I have painted representing people of a non-white ethnic group ( which really only shows how little painting I've done! ).  In keeping with the existing British and German figures in the collection, they will be based singly, which should allow them to be used for pretty much any WW2 period  rules.

Finally a  couple of little resonances, which gave me the 'nudge' to look at these. Firstly, I have been employed by an Indian company for the past few years,  which employment looks likely to end in the next few months. It occurs that these chaps may be a little memory-jogger for my time with my 'offshore' colleagues.  And lastly, a  reminder of  contemporary realities - the maker of these figures is of course Strelets, and they were made in Ukraine. 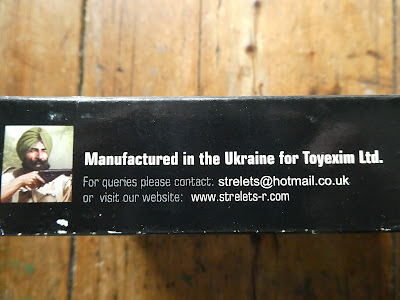 Given that, I feel I'd better make as good a job of them as I can.  I'll post again soon, I hope, to show how they turn out. Meanwhile keep well, and safe, everyone.

*** UPDATE ***  many thanks to the most excellent blogger  Nundanket  ( in fact, I should of course say 'Nun Danket' to you ),  who pointed out that the incongruous 17th Century-looking figure is indeed a quirky bonus feature from Strelets - a  different 'Streltsi' figure is included in every sprue of their range. See this page from Plastic Soldier Review for more details. Has anyone actually built up a 16th/17th Century Russian force from these? It could be fun, but you might have to buy quite a strange selection of other figures!