Battle Planning : A Bit Of A Re-think

I've had a bit of a re-think.. In my last post, I set out the likely forces involved in the upcoming battle in my 'Soldier King' campaign, with the Prussians attacking their Austrian foes in defensive positions  at the town of Zouache.  I had established that I have sufficient troops to portray the opposing armies in Bob Cordery's Brigade Level 'Portable Wargame'.  All well and good, BUT what I have been worrying  about is the small size of battlefield I can use, relative to both those army sizes,  and  also the topographical layout of the area to be disputed.

I think I should  show the campaign map, to illustrate my concerns. It looks like this:

The Austrians are of course positioned at Zouche. The Prussians have their infantry and guns advancing down the road from Wittingen in the North, while their cavalry has swung around to the West and is approaching from Stauffen.  As you can see, the town is in the bend of a  river - so there must be a bridge into the town on each approach road, which the Prussians are going to have to secure. It's the combination of river, two bridges, and town that I fear will  make things difficult to fit into a 9 by 9 grid. I had a go at a layout:

Hmm... I can fit the two bridges and the river in, with a bit of distance between so the defenders are stretched a little by the flanking cavalry column. But there's no space for the approach: if the Austrians contest the bridges, battle will be  joined immediately and all the fighting take place at the edge of the table, and being pretty static too.  I wondered if the Prussian cavalry might be assumed to have rushed the Western bridge, allowing a bit of manouevering once across, but that seems a bit unfair on the defenders - who are after all supposed to be 'entrenched'. If I put the river and bridges closer to the centre of the table, then maybe there's not much room for movement once the bridges have been crossed - they will be too close together.

I think the problem is maybe that I am  trying to cram too many troops and too much action into a small space, and it's just going to bog down.   Thinking time..

One option might be to 'mini-campaign' it. I did this quite successfully before, at Rahden earlier in this campaign. Draw a map of the general area, encompassing  multiple tables worth of terrain, and use map  movement to determine where and when contacts between opposing forces occur, transferring to a table when battle is joined. It worked quite well for Rahden, and also reminded me of Charles Grant's system used in 'Wargame Tactics', where the initial moves of larger tabletop battles were made on maps, allowing an element of  pre-game manoeuvre and surprise. However, I think in this case there's less of a case for map movements, as the position is fairly well decided already : the Austrians are pretty much dug-in at the town, and the Prussians are attacking from two directions, already obvious. Austrian cavalry  could be sent out to harrass the approaching Prussians, but that's about the only map-movement option, really. Hmmm...

So my next idea is to address the issue of numbers of troops and available space :  I can't increase the space available,  but maybe I can change the scale - 'zoom out', so to speak?  Maybe what I need is for the table to represent a larger area, so the troops are able to fit into less space, not move so fast across the table, and not shoot so far, as they do in the Brigade level game of The Portable Wargame.  And of course, I need look no further  than... the next chapter of Bob's book 'The Portable Napoleonic Wargame'! Here we have the Division level game, and I think it might just do the trick.  It allows two infantry units (notionally regiments, in a brigade )  to occupy the same grid area, and they move and shoot over shorter distances.  The forces available would translate into two or three infantry brigades and one or two cavalry brigades for each side (plus artillery units),  which would seems fairly manageable and hopefully make the table a bit less crowded.

So, let's see how the forces might  now look - first the Austrians: 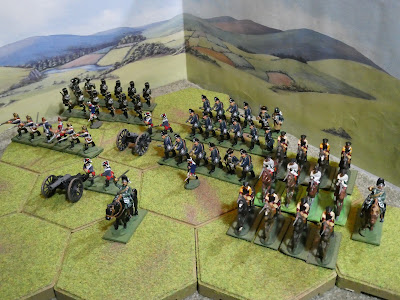 It's interesting that the Strength Points values of the armies have increased by about a quarter, partly at least due to the allocation of points to the Brigade commanders. Movement and firing distances are slightly shorter than in the 'Brigade' game, and two regiments can occupy one hex - so the my limited table space should feel a bit more spacious for the forces involved.

Now I just need to figure out the terrain  - which still needs some hard thinking, I reckon, and battle may commence. But it's past my bedtime, so that will have to wait for the next post. With apologies for the slow progress on this, due to our old friends 'time and space, dear boy..' ( just work and domestic duties, really - and some  January/ Pandemic  ennui, I think ).   I am very aware that this has been very slow  - can't help comparing  with the fantastic amount of work put in by Nundanket on his planned Hohenfriedberg  game - now that's how to prepare for a battle!

I will try to be a bit quicker with the next post, which may even see the forces engaged. Meanwhile keep well, and safe, everyone.