After much  mulling over, I am trying a 'mini-campaign' approach to the pending battle in my Seven Years War period  'Soldier King' campaign. This has involved creating a map of the area around the fortified town of Rahden,  taking the boardgame's map as a basis. I'm afraid I am certainly no artist, so anyone of an aesthetic sensibility may want to look away now:

I hope it will however do, for us Ragged Soldiers. The idea is that each large square on the map equates to roughly one of my 3 feet square tables, hence the map covers about 16 tables.   The city of Rahden and the main roads from the game map were drawn first, and then  each large square given a  a dominant terrain type. To do that, I borrowed  from Henry Hyde's 'Wargaming Compendium' chapter on campaign map generation,  using simple dice rolls to decide whether the square is open terrain, hilly, wooded or forest.  The result was a fairly open map, with Rahden itself placed among hills , and a forested area are just to the North , which may make things interesting.    For the actual battlefield terrain when two forces meet, my idea is to use Bob Cordery's Terrain Generator.

Any sensible person with a 3 feet square table and a map square representing one table  would then have subdivided each large square into 3 by 3 small squares:  but I am not necessaily that person, and besides I had originally drawn only the large squares,  which were 4cm wide on the paper.  So, each large map square is divided into 4 by 4 smaller squares.  I decided that for map movement, infantry in march column  would cover 2 small squares per turn, heavy cavalry 3,  and light cavalry 4 small squares -  diagonal moves counting as 2 squares, to keep things simple.

So that's the map; now to the forces. The Austrians obviously started with their entire force ( 3 Line infantry and 2 Heavy Cavalry )  at Rahden town.  Local rumours abound of multiple approaching Prussian forces come to liberate the town, so they suspect  something is 'in the wind'.  The Prussians enter from three roads :

- Force 1 from Engeholl in the North with 4 Infantry and 3 Heavy Cavalry,

- Force 2 from Reuthen in the West with 3 Infantry,

- Force 3 from Senden in the  South with 2 Light Cavalry.

After much psuedo-scientific faffing about considering distances marched, speeds and who started first, I thought I shouldn't be steering things too heavily - what seems 'sensible' may turn out just a bit too predictable.  So I plumped for 'let the dice decide',  and went for randomly choosing which force would enter on Turn 1.  The die was cast: Force 3, the Light Cavalry, duly trotted on from the Southern road.  It seemed to have a nice logic, in fact - they should be the fastest-moving.

Then I needed to decide two more things : (i) when would the other Prussian forces appear, and (ii) how would the Austrians react?  The dice would again decide.  On Turn 2, a second Prussian force would arrive if a D6 roll turned up 5 or 6. If not, on Turn 3 it would require 4,5 or 6, Turn 4 then 3,4,5 or 6, and so on until Turn 6 - automatic arrival. Which of the remaining forces?  Dice again.  Then on the turn after the second force arrives,  dice again for the 3rd Force - 5 or 6 for success, and increasing chance on subsequent turns as above.  It seemed like a good enough idea to reflect the problems  of bringing three widely-spread forces together, given horse-powered  communications and inevitable navigation/road conditions issues.

As to the Austrian reaction - I assumed that once an enemy force arrived on the map, there might be lags in both intelligence reaching the town, and in the occupying force getting organised and sending out units to intercept. A similar die roll system seemed good - so on the turn that a Prussian force arrives,  roll a D6, and if 5 or 6 rolled then Austrian units can move in response. Next turn, 4,5 or 6 , and so on.

And so, off we go. Prussian Light Horse having been reported in the South, the Austrians reacted commendably fast, and on Turn 1  their two Heavy Cavalry units clattered out of the town gates to investigate - sure enough,  at the end of the turn they found themselves in the neighbouring small square to the Prussian Lights.  I decided this means 'contact' : being only 1/4 of a wargames table apart.

Does 'contact' mean 'combat', however?  The Prussian Light Horse commander, facing equal numbers of  'Heavies' and with no support, would be quite unlikely to risk fighting, surely? He can move faster, thus easily get away, and  he might try to draw the defenders away from their base. So, roll a dice - 1 to 5 means retire, hoping to draw the Prussians on, but 6 means a rush of blood the head and 'charge!'. Die duly rolled - a 3, so the sensible option taken, and combat refused.  For the Austrian Heavy Horse, do they hold their ground, having checked the Prussians progress, or do they go forward in hopes of forcing a fight?  Hmmm, how about roll 1-4 means hold, 5 or 6 'vorwart'?  So they rolled - 3 again, hold ground.  Is this essentially 'Kriegspieling'  it?  It seems to work..

So, Turn 2.  Does the Prussian second force arrive? Roll a die : a '1', so the Light Horse are on their own.  They back off, South and West, looking to reach the Western road, along which friends may arrive. The Austrian Heavy Horse shadow them by moving West, not too far from home.  Turn 3: Prussians roll '1' again, so again no second force! The roads must be bad..  The cavalry's wary moves continue, with the Prussian Lights reaching the Western Road, and the Austrian Heavies moving to block it, nearer town, all the time no more than one 'table' apart.   Turn 4 : finally (needing 3 or more, rolled a 5)  the Prussian second force arrives : and the die decides  it is 'Force 2',  comprising three Infantry units, entering via the Western road, nicely placed to link with their light horse.  Interesting...  the Austrians roll to react : needing 5 or 6, rolled 4, so news has not reached them yet. The Prussian Light Horse sensibly remain astride the road, waiting for their foot to come up; the Austrians Heavies maintain position and keep a watchful eye. 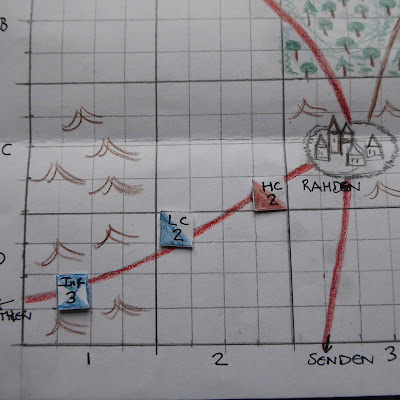 Perhaps that's enough for one post: we seem to have a system, and we'll see how things develop. I feel an engagement on the West road is likely.

This post has been a bit delayed; 'time and space' as ever intervened, including a long weekend with no internet or phone connection! That did at least allow some  time for reading, and some painting - here are the almost-finished  first squadron of the Austrian Erzherzog Ferdinand Cuirassiers. Just awaiting basing, they should be ready for whatever battle ensues. By my standards, I am quite happy with them - I haven't the patience or skill of Stokes over at the excellent Grand Duchy of Stollen, but I don't think he's watching here, so I may get away with it. Anyway,  let's see how they fight!

Hmm.. that officer's sword wants straightening, though.    Until the next time, keep safe, and well, everyone.