All a bit quiet here recently, partly due to a pleasant week's holiday in Northumberland; as it turned out, there was quite a lot of what might be called 'hobby interest' there.  I suppose if you go anywhere in Britain, there will be history waiting to be discovered, of course - but Northumberland seems to have had more than its share!  Unsurprising, perhaps, given its location close to the English/Scottish border,  the scene of centuries of warfare.

The area is peppered with fortifications  of various ages, styles and states of repair: a great example was the village of Elsdon, in Redesdale,  within a handful of miles of  our cottage ( which was in Coquetdale ). A walk fron the village started close to  a well-preserved Norman  motte and bailey: 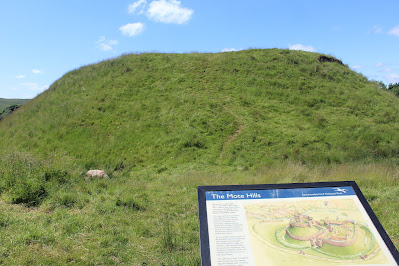 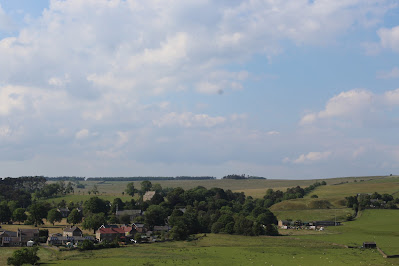 In fact the village, rather picturesque now, is a completely militarised landscape. The motte and bailey is on the right, and in the centre the large building is a Pele tower ( fortified manor house ) dating from the early 15th Century - the neighbouring church has thick walls so as to be defensible, and the the village green ( left ) was surrounded by a defensive wall too. They were well-prepared to see off any Scots raiders, Reivers or 'Moss Troopers'.  The churchyard also revealed a mass-grave, probably of  casualties from  the battle of Otterburn ( 'Chevy Chase' ) nearby in 1388.

The Norman castle at Elsdon was built by Robert de Umfraville,  soon after the conquest, but abandoned by about 1160 as his descendents moved to nearby Harbottle, where we also visited the  ruins of their stone castle. 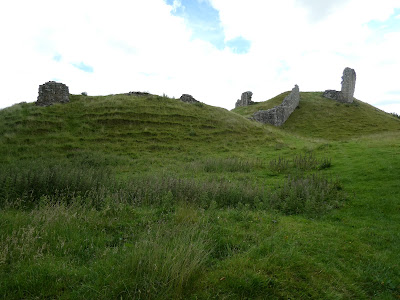 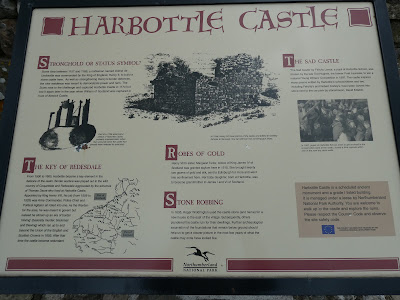 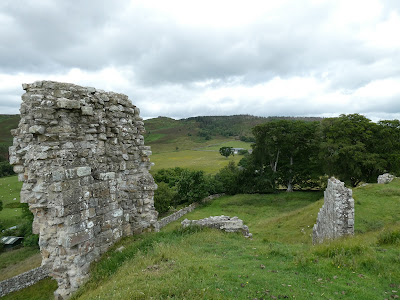 Mind you, it did them no good, as the new castle was beseiged and taken by the Scots in 1174, only a few years after it was built! the castle fell into decay after the accession of James VI of Scotland to the throne of England in 1605, which presumably brought peace to the region, after hundreds of years of strife. Until 1689, 1715 and 1745, that is!

Moving forward a little in time, we also visited the splendid National Trust property of Wallington, home of the splendidly intellectual and eccentric Trevelyan family, and childhood home of historian G.M. Trevelyan, whose histories of Marlborough's wars  and of Garibaldi will be known to many. It's a good visit for anyone, and the Walled Garden is a particular highlight if gardens are your thing - we were lucky to see it in mid/late June, peak flowering season.  But there is a bonus, especially for readers of this blog. In the former servants hall, we saw this:

"The collection of model soldiers, now totalling 3,800, was acquired in the early 1880s for the three sons of George Otto Trevelyan - Charles, Robert and George. They were made in Germany.

The boys set them out on the floor of the Museum above the Saloon, following plans of actual battles of the Marlborough and Napoleonic Wars. Books were used to represent hills. Careful calculations were made as to the correct fire-power of the guns and the agreed number of soldiers laid low at each volley: a battle might therefore take several days to complete. 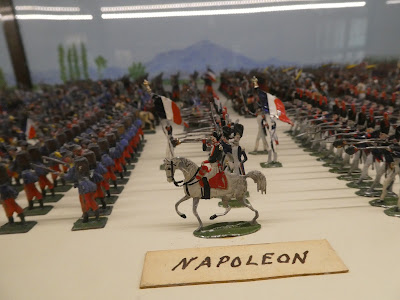 It was to this study of the game of Kriegspiel that G.M. Trevelyan attributed his own capacity for so vividly describing battles, and both he and Sir Charles gave Kriegspiel as their hobby in Who's Who, even as adults. 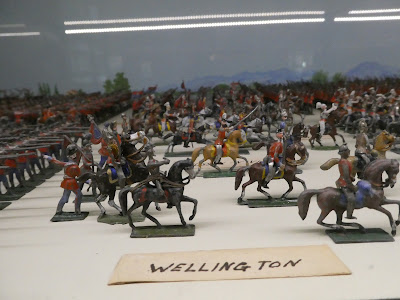 The soldiers are today laid out in regiments of Napoloeon's, Blucher's and Wellington's armies, exactly as Sir Charles left them in the Musuem."

Impressive stuff, and 25 years before H.G. Wells!  Though of course, Kriegspiel was around well before that.  The figures looked to me about 20mm ( maybe 25mm? ) and 'semi-flat' style, there was no information on the makers apart from 'German'.  Would any experts out there like to hazard a guess?  Much of the French infantry are uniformed in contemporary ( c.1880s ) style, but I'm sure they performed splendidly under the command of Bonaparte!

Now on to the 1940s: we spent a lovely sunny afternoon at Almouth beach, where we found another relic of our island's warlike history - a nice  grouping of 1940 vintage concrete anti-tank cubes.  These were part of the very rapidly-contrstructed defences which were installed all along the South and East coasts of Britain following the defeat of France - we are familiar with them on  East Anglian beaches too. 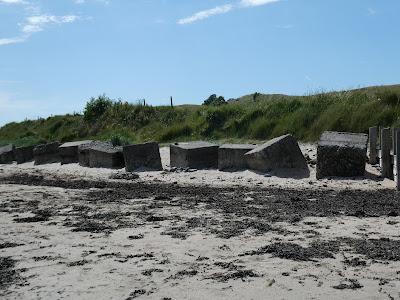 What with the pill-boxes and other fortifications that still pepper the landscape and once made up the multiple  'stop lines'  intended to delay Hitler's Panzer Divisions if they invaded, I'm sure I've been told that this was the largest civil-engineering program in British history up to that time.  Though perhaps it was  overtaken only two or three years later by the construction of airfields for Bomber Command and the U.S. Army 8th Air Force, which resulted in  a concrete runway being withing 5 miles of pretty much any point in East Anglia.

The sheer amount of effort that must have gone into these things, in a very short timescale,  is impressive  - but when confronted with them so far North, I have my doubts about them. Would Hitler have really tried to land an army here?  The whole point of The Battle of Britain being that air supremacy was a pre-requisite for successful landings, there was surely,  simply no chance of the Lufwaffe being able to put effective ( i.e. single-seater ) fighter cover over  beaches and sea-lanes so far North - they just wouldn't have the range. That must have been known at the time, so one wonders why so much effort was put into these defences. I suspect it was perhaps more about stiffening morale at home, and 'being seen to be doing something'. Does anyone have a view, or specialist knowledge,  on that?

So there we are - a very  pleasant week in Northumberland ( we were very lucky with the weather!), with lots of historical/hobby interest thrown in. All those castles, pele towers and defensible churches,  and the general landscape,  gave me ideas. Must dig out my copy of 'The Steel Bonnets' and learn about the Border Reivers and their exploits.  Hmmm, would it make a Portable '3 X 3' Wargame?    Keep well, and safe, everyone.