Seven months ago I attended the 'Broadside 2021' show at Gillingham - back in the early days of the Omicron variant, all of us masked up and a bit nervous.   This Saturday I was able to return, unmasked and much more relaxed, to the same venue for Broadside 2022. For a dedicated royal jubilee avoider, it was a nice change from beacons, street parties and trooping the colour.

And need I say, it was a good show; one of the smaller events, perhaps, but that makes it very manageable and relaxed.  The program listed a dozen display games and about 30 traders, plus commercial demo games, painting, and quite a few 'flea market' tables.     I took a few pictures of some of the games that caught my eye : 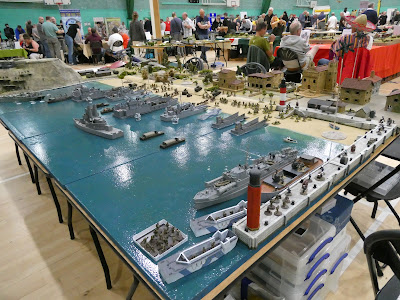 First, Deal Wargames Club's  'The Real Guns of Navarone',  liberation of Elba, 1944, in 20mm scale and  using Rapid Fire rules.  This is what my childhood gaming buddies and I were aiming for with our Airfix figures.. As you can see, the hall is spacious and quite well-attended. 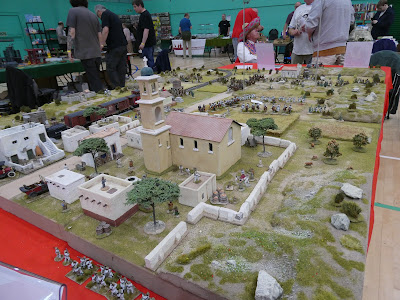 Shepway Wargames Club  'Viva La Revolucion'  Mexico game with Crush the Kaiser rules.  Great  terrain - and you can't fault a game with a train in it - and full marks for the sombrero sported by one of the players. I liked the figures,  non-uniform but in a nice 'limited palate' style  : 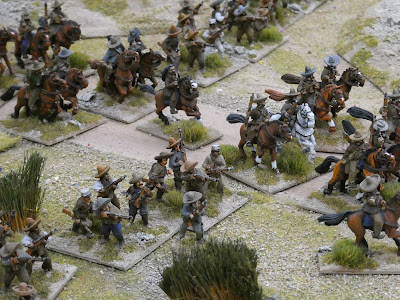 Next a near-contemporary game, Skirmish Wargames 'The First LRDG 1916-1917', set in the Egyptian Desert.  I liked the aircraft 'flying' on a plastic beer glass, and I gather all the vehicles were converted from those 'collectable' model vintage vehicles which were common a few years ago -  and now easily acquired in charity shops. 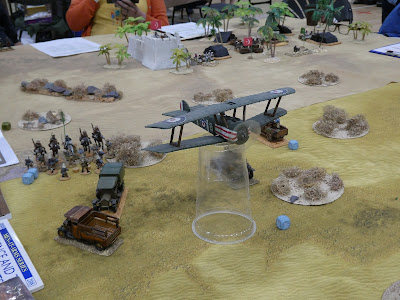 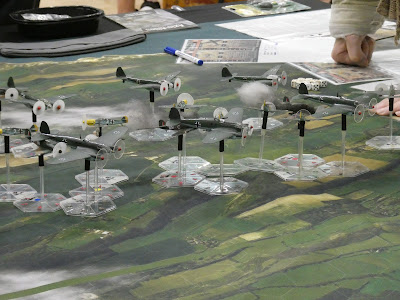 More aircraft : SEEMS 'One Day in the Battle of Britain' - a right old melee with nice 1/144 scale models. 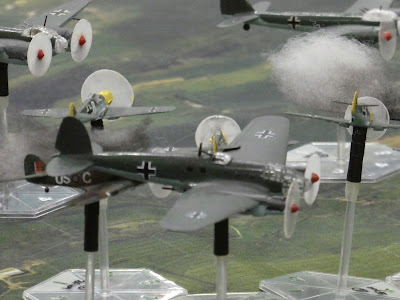 Last and absolutely not least,  the show wouldn't be complete without Postie's Rejects. Big Lee's 'Beau Hunks'   French Foreign Legion game in 15mm with The Men Who Would Be Kings rules, incorporating a 'game within a game' involving Laurel and Hardy, inspired by their film which contributed the title. I admit I didn't really follow how that worked, but it looked splendid and they were clearly having a good time, and they won 'Best Game' with it - congratulations!

On other blogs you'll see many more and better pictures of these and all the other games, in particular Ray 'Don't Throw a One', Richard 'My Wargaming Habit' and Big Lee's 'Miniature Adventures' (featuring their game) - all highly recommended.

The day wouldn't have been complete without some shopping, and I was quite pleased with my acquisitions, which had a strongly WW2 bent. I'm still looking out for material for the 'D-Day Dodgers' in  Italy 1943-45, and I picked up some more troops : 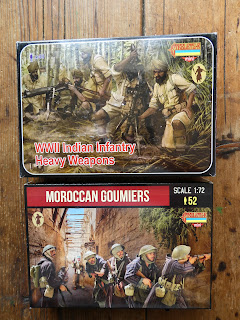 The heavy weapons will complement the Indian infantry I acquired at SELWG last year, and the Moroccans  will add even more variety to the polyglot Allied forces.  This does rather leave the opposing  Airfix Germans looking a bit lacking in variety - I think perhaps some Fallschirmjager may need to be acquired, and of course the Italians themselves need to be represented. Hmmm.. more shopping, then?

The flea market was well worth a look, and the  chaps from Rainham wargames club had a selection of various vehicles at a very good price. I think maybe  WW2 gamers can  tend to get a bit obsessed with tanks, but I reckon you can't have enough light vehicles and transport, so I was very pleased with this little lot:

I also picked up some paint, and some nice 'gunpit' type terrain items (can't remember the trader, sorry!) which will come in handy for dug-in defensive positions and some flags for 7YW Prussians. Finally, my  'impulse buy of the month' was  a set of rules for a period that I don't do, and possibly never will - 'they just looked interesting' - oh dear! This way madness lies. The nice chaps at Real Time Wargames were the beneficiaries ( they had a nice-looking Indian Mutiny game in 10mm scale, which I forgot to photograph - I bet Ray did, though ) , anyway I will draw a mildly embarrassed veil on that!

I spent a pleasant three hours at the show and thoroughly enjoyed it, so many thanks to all concerned - and if you are within range this time next year, it's well worth a visit.

( Finally as a slight aside, I realised that 10  minutes walk from the venue was Barnsole Road Primary school - which I last will have seen  at the end of summer term in about July 1970. 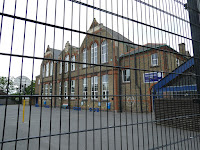 It didn't look to have changed much - can't say the same for me! A nice bonus piece of nostalgia, glad I took a look ).

Now I really need to get on with some more painting and some gaming - I think the show has been good for inspiration. I hope it's entertained you a little, too! 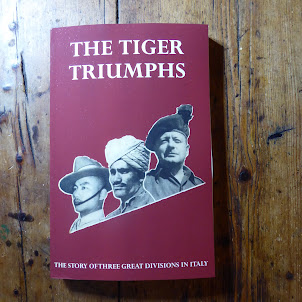